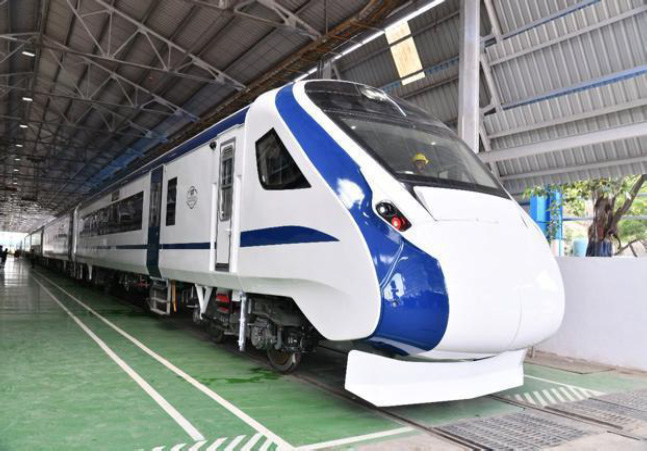 When one talks of trains in India, the image that strikes the mind is that of a locomotive hauling the coaches. Concept of Multi-Unit Distributed traction i.e. train-set is not heard in Indian Railways for Main line train operations. Even though Train-sets – Electric (EMUs) were running for almost a century and Diesel (DEMUs) were there since 1990s, for sub-urban services, the concept of train-sets for Main line intercity operations has not started . Advent of Metros in India has heralded a new era of Fully Air Conditioned Train-sets with Distributed Power System and introduced to the public the picture of Comfortable journey with aesthetics.

Train set is a set of rail coaches coupled mechanically and electrically with driving cabs at both ends and distributed traction power across the coaches. Depending on the requirement, the amount of power i.e. number of powered coaches can generally vary from 50% to 100%. In Train 18, 50% coaches are powered coaches i.e. motor coaches.
The distributed power train-sets have lighter axle loads, allowing operation on lighter tracks, where locomotives may be prohibitive of higher axle loads. Another side effect of this is reduced track wear, as traction forces can be provided through many axles, rather than just the four or six of a locomotive.

Train sets generally have rigid couplers instead of the flexible ones often used on locomotive-hauled trains. That means brakes/acceleration can be more quickly applied without an excessive amount of jerk experienced in passenger coaches.